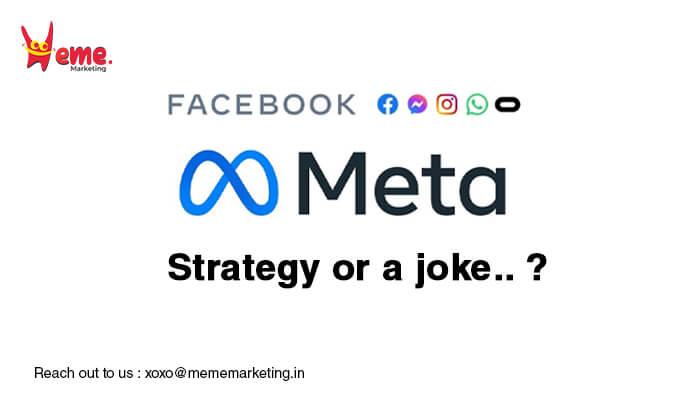 On October 28th, 2021, the CEO of Facebook Mark Zuckerberg announced the rebranding and renaming of Facebook to Meta. According to the words coming out to the world, Meta is a sci-fi term derived from the word Metaverse. Metaverse is a virtual reality space in which users can interact with a computer-generated environment and other users.

As the news came out, creating a big buzz all over the world, the waves of confused murmurs were running through the globe as it become a reason of concern for Facebook application lovers. The whole world that has been using Facebook from the time that is even hard to calculate and tell properly, this sudden change was hard to accept.

Knowing the half information also started the trend of creative memes all over the internet, but soon that came to an end as the news started to get clear and completely understandable that the change that has taken place recently is for the “company” Facebook and not the “application”.

The parental firm was rigorously known as Facebook Inc. which is now after rebranding is denoted as Meta Inc. is behind the applications, famously known as Instagram, WhatsApp, Messenger, and also the virtual reality company Oculus. The “Lite’ versions of these applications are also run under Facebook which now will be represented by Meta.

Even with the new name, Facebook continues to do for what it was built in the first place, connecting people

With the change of the company’s name, Facebook to Meta, the logo of the company also features something new now. Sharing a new massage with it, the old big blue thumbs up representing “like” is now changed to a big blue infinite sign, connecting people in an old manner but making things stay forever.

Concern across the globe


As the renaming of Facebook to Meta created a big buzz across the globe, there were several reasons of concerns as well that came into notice. From public-privacy to business person-buyers, the issues of Facebook both the company and the application started to peak.

The problems begin with the first concern of Facebook users that what will happen to their private information that has been shared on the platform Along concern was started to rise by the people who run businesses on Facebook.

Meta-a name or a joke?


According to many sources and reactions pouring in from across the globe, “Meta,” itself is a with crossing country borders the meaning of the word also changes.

In Portuguese and Spanish, it means “goal”. In Hebrew, it stands for “died”, referring to a woman. And in Brazil- Facebook’s fourth-largest market- “Mets” can be implied as a sexual word.

The meanings that were coming from every part of the world, there were some meme materials on the famously known social media sites that are run by the parental firm Facebook, that this new name Meta might be derived or maybe meant as mates or something referring to the theme of the application for which it started in the first place, connecting people.

By releasing a new press release, and stating in clear words. Mark Zuckerberg has said, “To reflect who we are and the future we hope to build, I’m proud to share our company is now Meta”.